‘The Mountains are calling and I must go’ John Muir END_OF_DOCUMENT_TOKEN_TO_BE_REPLACED

From Tacos to Sushi,
Poutine to Pies END_OF_DOCUMENT_TOKEN_TO_BE_REPLACED

How my life changed forever. END_OF_DOCUMENT_TOKEN_TO_BE_REPLACED

The last day.
Woke up.. completely pissed. Bag packed though so could be worse. Headed down to the coach head spinning threefold. Wasn’t long before I had to make a little trip to the toilet  to throw up a bit. and again. We arrived in Philldelphia at around 1pm on a rather cloudy day. First stop was The Rocky Steps complete with running up them. .. I filmed… no running for me. A little drive on we approached the Liberty Bell were we had a chance to see that and get some lunch. Can’t be in Philly just once in your life without getting a Philly Cheese Steak. Delightful. Actually pretty much cured most of my hangover and then it was back onto Betsy for the last time. Ahh sad.

After rolling through the Garden State we were soon in NYC. We arrived at the Double Tree, took everything off Betsy and said goodbyes.
A few of us met up in the evening and said more goodbyes. And that was that. 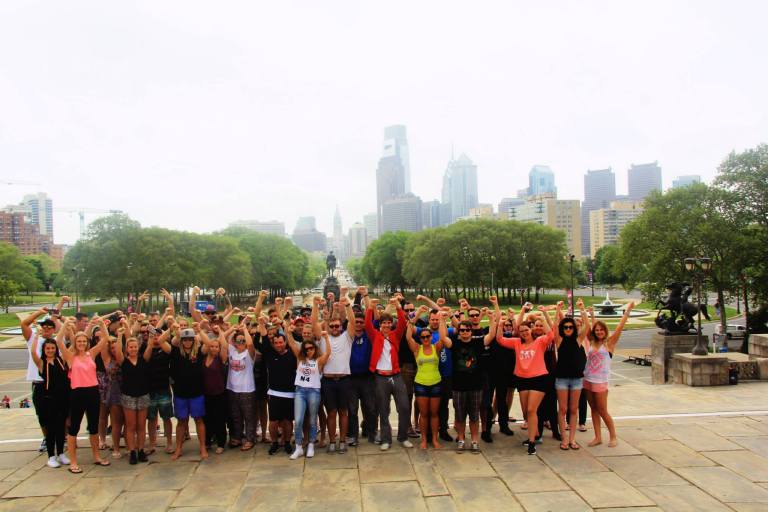 I couldn’t have wished for a more awesome trip or set of people. Thank you Contiki for  everything.

This post, and in fact this series of 26 days is dedicated towards Jarryd Morris. Firstly because I told him to fuck off several times whilst I was hungover on the bus but secondly because without him asking me where the next installation of ‘Contiki Diaries’ was.. I would have probably stopped somewhere around Memphis.

Coming Soon
– Day in the life of summer! LONDON VIDEO
-Eight days of eating in the BIG APPLE

One thought on “Contiki Diaries Day 26. The road to NYC”