‘The Mountains are calling and I must go’ John Muir END_OF_DOCUMENT_TOKEN_TO_BE_REPLACED

From Tacos to Sushi,
Poutine to Pies END_OF_DOCUMENT_TOKEN_TO_BE_REPLACED

How my life changed forever. END_OF_DOCUMENT_TOKEN_TO_BE_REPLACED

Almost a year on, I have decided to get round to talking about this trip!

I was initially inspired by @aglobetrot – (check her out on instagram- seriously. ). She was posting the most amazing photos and I had to find out where they were taken. Turned out it was Switzerland and seeing as I hadn’t been before I did the crazy thing and decided to book a holiday for myself. Just me on my own and without the intention or desire to even meet anyone whilst being there.
(P.S don’t forget to watch my video.. it’s linked at the bottom)

I did spend about a good week trying to figure out which airport in Switzerland was best to fly into. Wasn’t a big deal as Switzerland is hardly big but I wanted to try and get the best deal on flight in line with the best deal on trains from the chosen city into the Alps.
I can’t commit to any other Swiss cities but I really did love Basel.
FACT: Basel airport is actually in France. Don’t be like me and walk out the wrong side of the airport! Follow the signs to SWITZERLAND)

I was just staying for one night in Basel so I decided to opt for a hotel rather than hostel. I was arriving late and leaving relatively early the next morning so I really wasn’t in the mood for hostel small talk.
I stayed at Hotel D  which I thoroughly recommend, right in the centre and close to the Rhine.

DAY 1 Basel.
As mentioned I was not there for any length of time so instead of trying to cram all sorts in, I just took a leisurely walk along the river and had a coffee Al fresco. 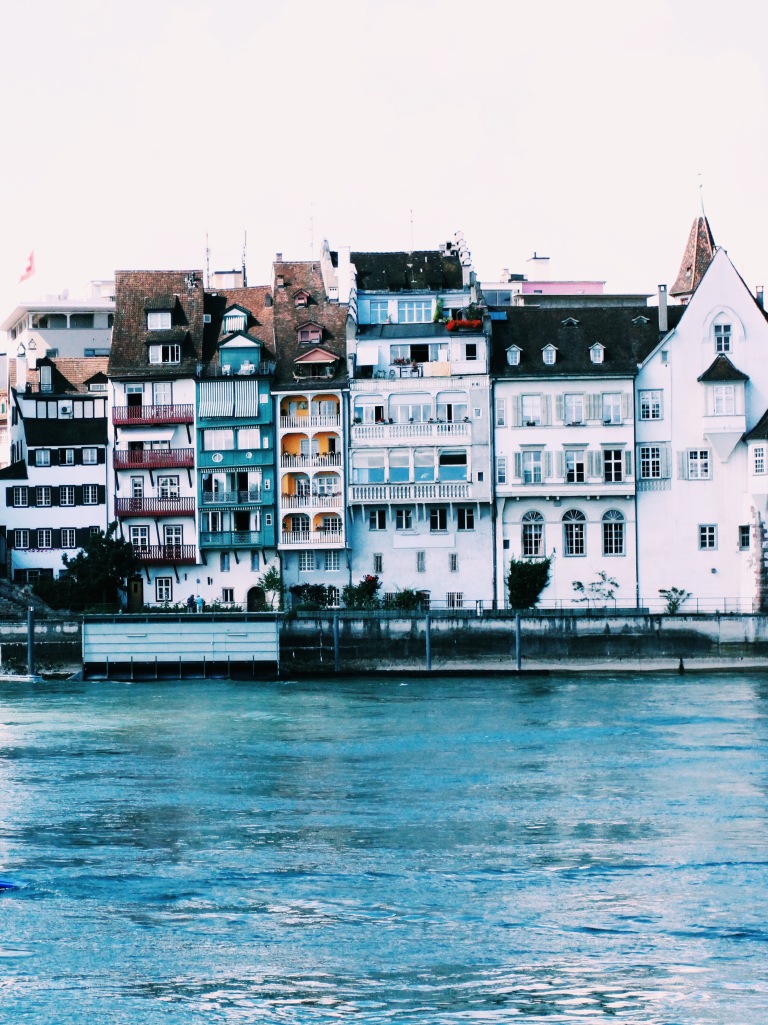 Then to the train station , where I boarded my train to Interlaken, where I made connection to Lauterbrunnen. I actually had booked this trip on National Swiss Day and whilst walking between the two stations in the town followed a day parade. Nice addition to my Swiss experience
The train journey then in was absolutely stunning as the train glided in and out of valleys as it made its way into Lauterbrunnen.

I chose to stay at the only hostel in the town ( let’s face it I’m not made of money) BUT it was still fantastic. Old wooden beds, and amazing views from the windows.

That evening I headed out for some food and ended up at a pub with a mate from the hostel ( my plan to not make friends failed miserably ). We both opted for the Thai Curry.. as one does in Switzerland. I was then treated to my second parade of the day and a flurry of wonderful fireworks over the mountains.

MOUNTAIN DAY 1. JUNGFRAU
Naturally it was August and I was set on seeing some snow. Jungfrau – The top of Europe ( named so as its home to the highest train station) was something I HAD to do.
HOW TO:  Foolish me decided to walk. I really didn’t comprehend the altitude I would have to climb. Google maps didn’t really help me out either. literally made it look like I would be having a leisurely stroll through along the valley villages….

So unless you want to climb the equivalent of 304 floors. ( thats 3 times the Empire state building) I would recommend the train to Kleine Scheidegg.
However, if you are a keen hiker then the views are wonderful and if you are feeling lazy there are several places to jump on the train. 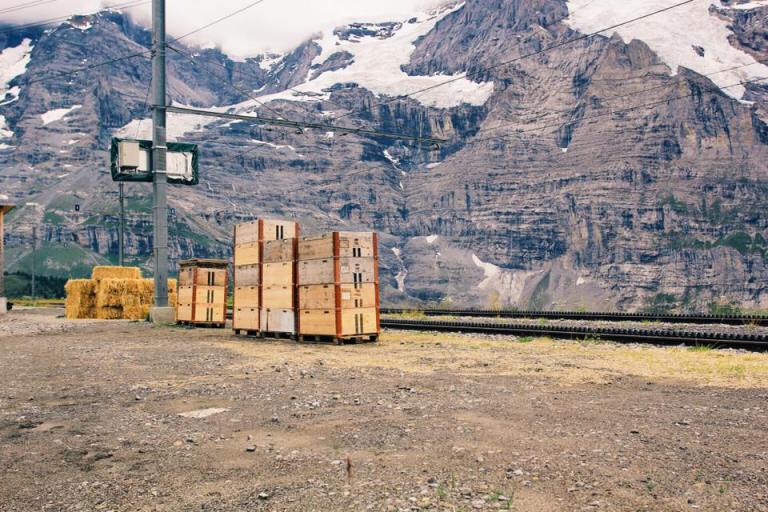 Once you arrive at Kliene ( and believe me, I almost cried when I saw it in the distance) you will find an array of eateries severing up traditional Bratwurst and sauerkraut alongside beers and ice-creams. 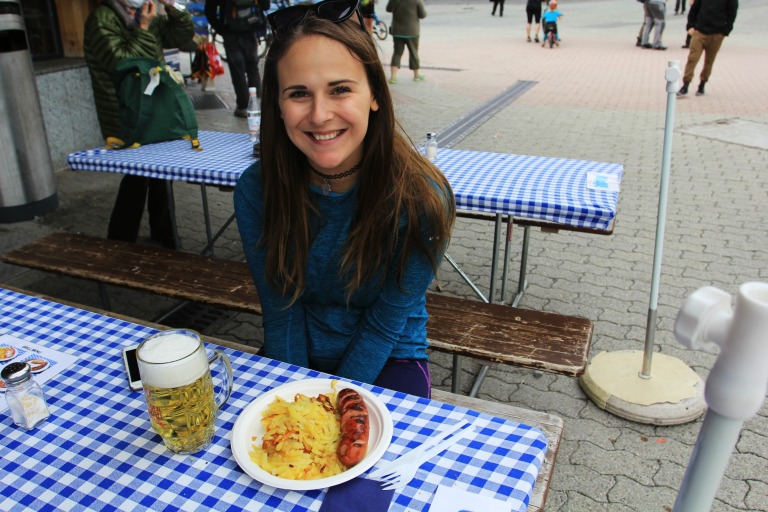 Then its all aboard your train ( which I believe you have to get to actually get up there) ? someone please verify….. A return ticket will cost you about CF 100 and it stops several times at platforms with views over the Eiger Wall and Sea of Ice. The website is a little confusing so I would recommend just buying your tickets there and speaking to a human. 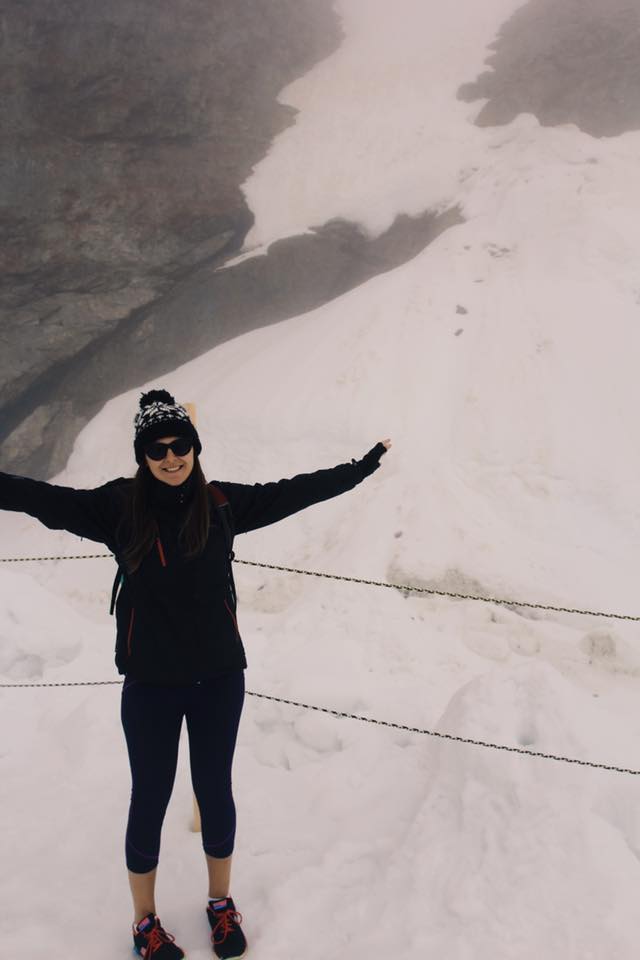 Once at the top you will find yourself amazed with views stretching as far as the black forest in Germany.. if its clear that is.. on this occasion it was not. However that shouldn’t dampen your spirits. 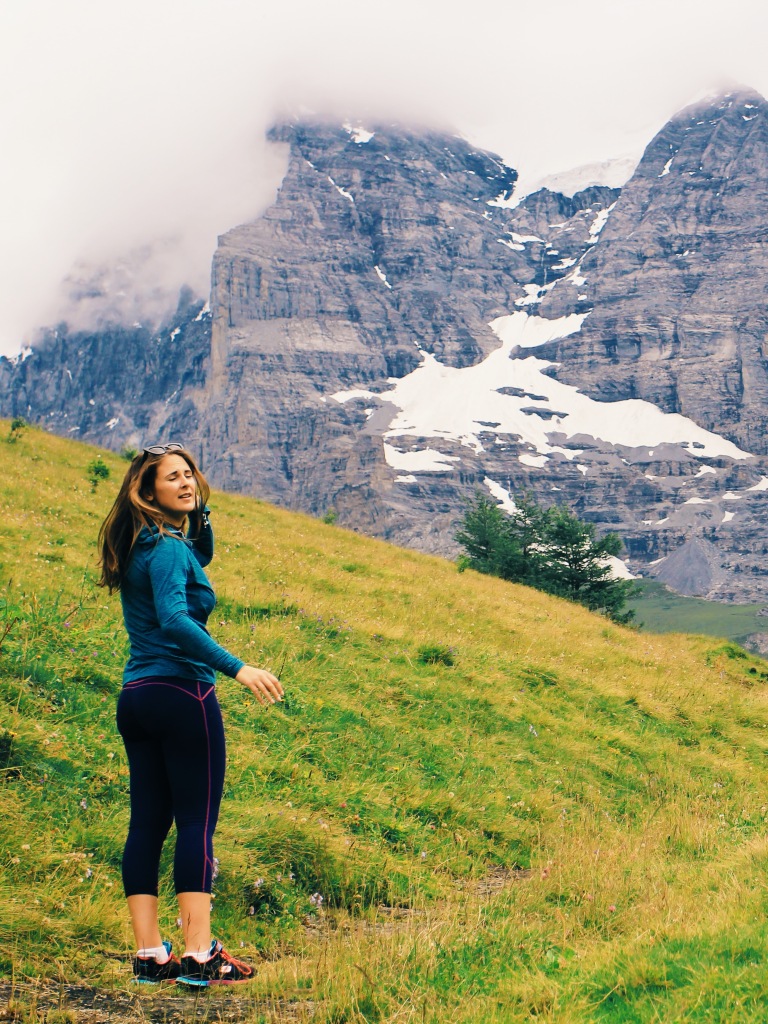 Views aside you can find the the worlds highest Lindt shop, an ice cave, a little ( and perhaps overly comerical) grotto with Snow White esque Dwarfs.
JUNGFRAU TOURISM SITE  – will probably give a little more detailed information.
Incase you are are wondering- I did get the train all the way down to Lauterbrunnen and had a massive burger. Legs most certainly done for the day.

MOUNTAIN DAY 2- Schlithorn
No day should ever start without breakfast and there are lots of options in Lauterbrunnen.
I would recommend Airtime for some excellent pancakes. 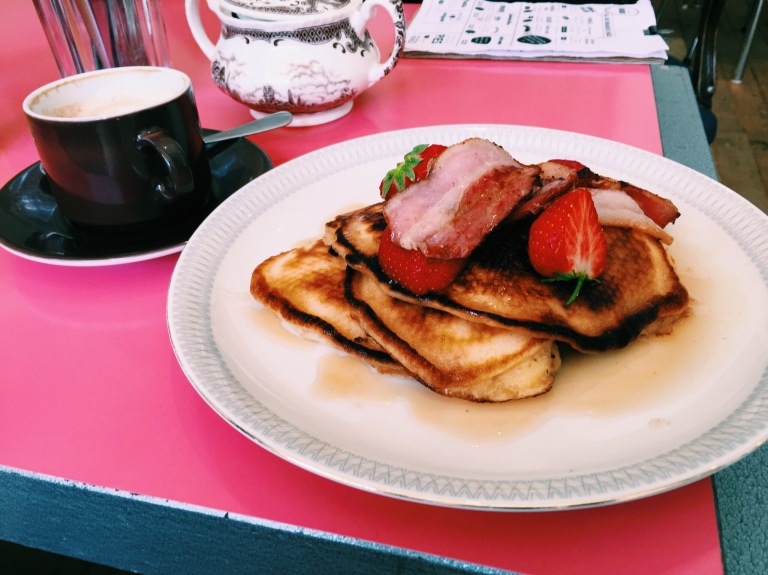 After the struggle that was the day before a more leisurely day was in order. Thus. We decided to have a picnic and to find a mountain. Schlithorn- home to the Bond Film ‘ On her majesty’s secret service seemed like a good choice. Again.. perhaps not a cheap location as you need to jump up about 3 gondolas but worth the views..and what are holidays for if not to spend your money.? 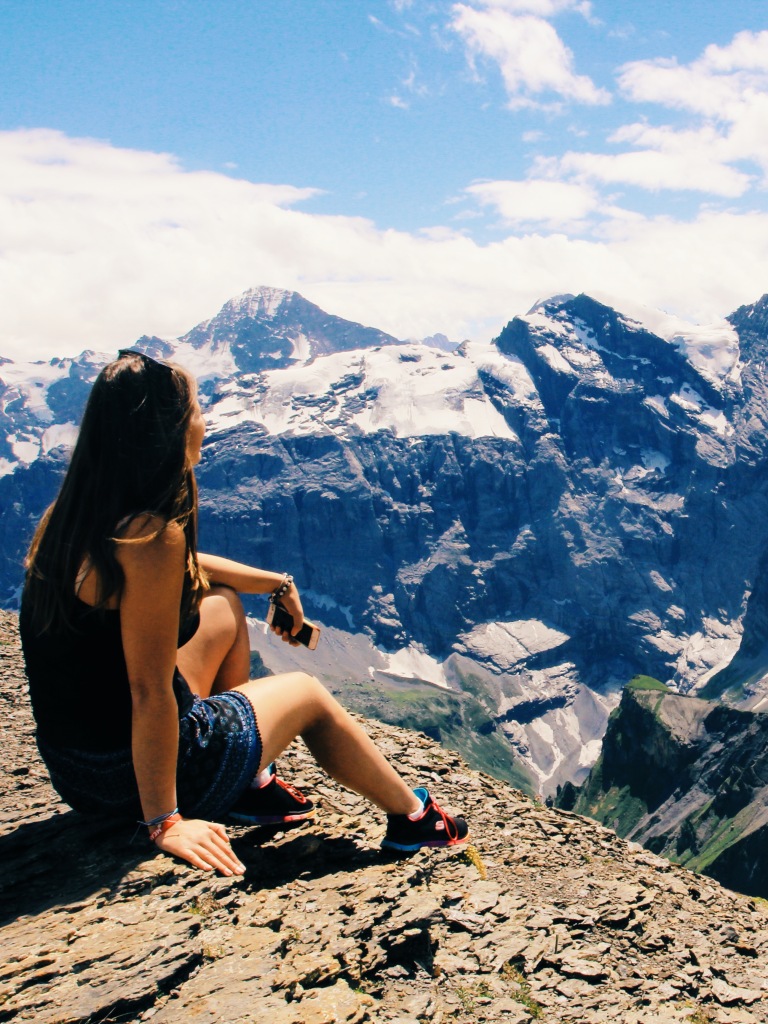 Here’s a little bit more info on that
There is quite a heavy 007 theme but once outside on the mountain trail you could be in the middle of nowhere and a perfect location to open up a bottle of wine if I say so myself.

After descending from the summit I would suggest spending some time in Murren as there are plenty of cafes and restaurants to enjoy a late afternoon before heading back to Lauterbrunnen. 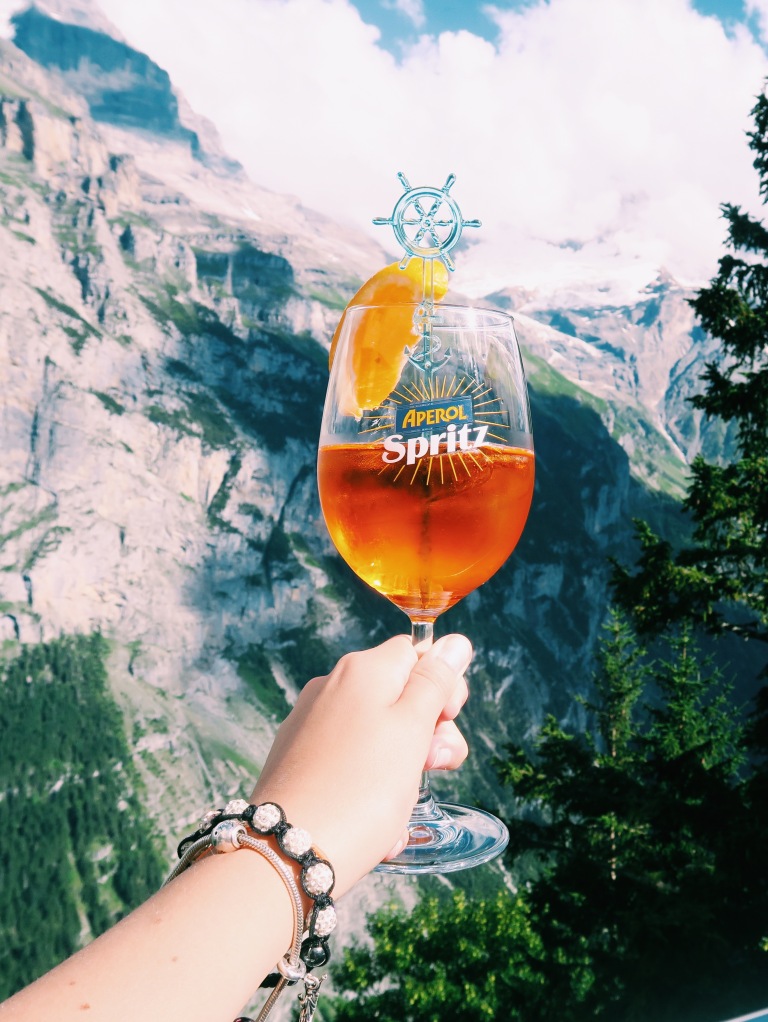 Whilst you are in Switzerland you most certainly have to have at least one Fondue. In fact, if you don’t you really are missing out. Don’t be a fool. .. ( I mean, unless you are a vegan then okay.. I’ll let you off. )

All trips have to end, but even endings should begin with coffee.

Have you been to Lauterbrunnen? What did you do? Did you love it as much as me?