‘The Mountains are calling and I must go’ John Muir END_OF_DOCUMENT_TOKEN_TO_BE_REPLACED

From Tacos to Sushi,
Poutine to Pies END_OF_DOCUMENT_TOKEN_TO_BE_REPLACED

How my life changed forever. END_OF_DOCUMENT_TOKEN_TO_BE_REPLACED

Background: Despite living in the UK for all bar one year of my life, It is perhaps embarrassing that it has taken me a good 28 years to get up to Scotland ( for the record I haven’t been to Northern Ireland OR Ireland either. )

Arriving in Edinburgh therefore marked three milestones in my life:
1) My first time in Scotland
2) The furthest North I’d ever been in the world
3) My first domestic UK  flight.

I had actually found out about Haggis through flicking through another travel company’s brochure. Having full faith in the brochure I was reading, I messaged my friend Bek and suggested that we book ourselves onto a tour for February.
Both seemingly unprepared for just how cold Scotland was going to be, we checked in our tour ( Highland Fling )  on a crisp Monday morning.

So, where does the tour go and what was my experience?:

For some reason, that was never explained to us ( perhaps because nobody questioned it) our tour actually went in reverse. It didn’t appear to be a problem for anyone, but maybe something you may want to confirm if you plan on meeting up with an old friend on the road , which to be fair, on tours I have done.

That being said our first port of call once leaving Edinburgh was Dunkeld, sitting on the River Tay, home to a Cathedral which officially opened in 1260… but took a while to be completed fully ( yano, couple 100 or so years). Dunkeld is also home to a couple of cute cafes and some amazing waterfalls, which are accessible through some easy pace trails ( the waterfalls, not the cafes)

As we furthered on our way to Loch Ness we passed the town/village of Pitlochry were Bek and I grabbed a Fish and Chip lunch as well as briefly stopping at the Commando Memorial, which provided us with a beautiful view of the Cairngorms and Ben Nevis.

Despite it being sunny all day by the time we got to Loch Ness the weather was far from desirable. Still we walked along a semi muddy path to get a proper view of the lake. Perhaps a view that may have been a little better had the sun not have been set.

The checking in Process to our hostel was a little different to other tours I have previously been on and took longer than I thought it should have. ( almost an hour) Not the best when dinner was becoming closer and closer. We opted to have both dinner and next morning’s breakfast at the hostel. I think breakfast was £4.00 and dinner £8.00 but I could have made that up.  That evening we took part in a hostel quiz and had a few drinks at the bar which was cozy with an open fire.

The next morning, after filling up on breakfast we headed towards Inverness and visited another set of beautiful falls ( Rogie Falls ) , this time equipped with a ‘swingy’ bridge, which is always fun. The weather too was ever changing but luckily for this portion of the day the heavens stayed closed. We then stopped in Actual Inverness which was not a particularly over 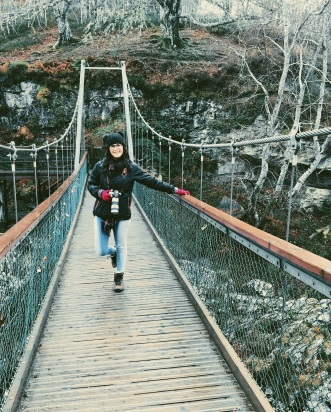 whelming experience although we did get to sample a deep fried mars bar which does have the Kate seal of approval.

That evening back at the hostel the tour itinerary suggested a toga party but again that was never mentioned.  Unlike, the tour route someone in the group actually mentioned this but it was brushed aside.

Mornings appear to bring sunshine in Scotland, and as it was on our departure away from Loch Ness the sun shone once more.  Our first stop was Eilean Donan Castle ( As featured in James Bond and Highlander). We had a few moments to take a few snapshots before moving on. Today I was particularly exited because we were visiting the Isle of Skye. Skye claiming it’s place on my bucket list in 2018 had been somewhere I was super excited to explore. ( I’m going to write about this in another post soon but I was super disappointed with Skye ) instead here I’ll still explain what we did. Our first major stop was the biggest town on the Island, Portree

We were let lose to have brunch and me and Bek found a cute spot ( Cafe Arriba) to warm up in, before facing the wind and rain once more. ( like I’ve said, the weather changes constantly)
After a little browse we boarded the bus once more and cruised around to some stunning spots on the Island, including Kilt Rock a beautiful … you’ve guessed it..Waterfall.
We also spent a lot of time running around in the wind which was mildly entertaining. ( and can be witnessed in my video below )

We spent the night on Skye and the majority if not all of the group chose to eat at the hostel bar which had a deal on a salad and a pizza.
When me and Bek decided to go back up to the room our fellow travellers were in bed, fully dressed, coats, hats and scarves. ( not gonna lie the room was cold) Bek actually managed to get the little heater to work and thankfully it was right by my bed, but I think others were still cold. The bathrooms were not the best either and I have stayed in a range of places. 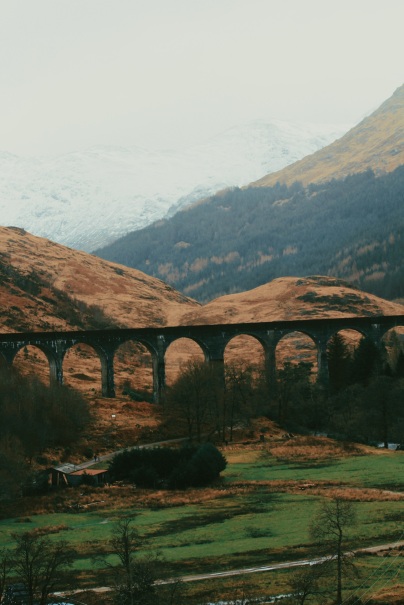 The next morning we walked over the Skye Bridge, which was a lovely opportunity to see a last glimpse of the Island in the sun and on our way to Oban we had the opportunity to get out of the bus and hang out a little in the snow, again stunning.  We also stopped off at the Glenfinnan Viaduct, a spot familiar to any Harry Potter fan. 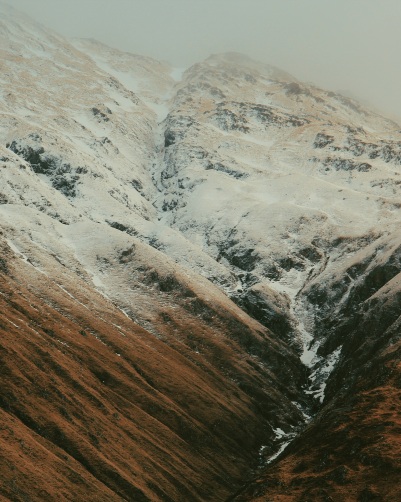 I quite liked the look of Oban and actually wished we had spent two nights there instead, the hostel was much nicer, included a breakfast which is always a winner and it looked like a town we could have spent at least a full day in, if not the pubs.

For our last meal as a group we actually went to a Spoons ( a Wetherspoons for anyone unfamiliar ) .. which being British I found quite hilarious as there was literally so many other places we could have eaten. There was some talk of going out out, but nothing really materialised and I had a good nights sleep on the worlds highest bunkbed.

Our last day.
It was time to head back to Edinburgh.. but not before a couple of final spots on the way. Of course when we arrived in Glencoe, the rain was pelting down. I still felt obliged to  get out with the camera.. something my leggings were still regretting

several hours later. We also had a little tour around the Deanston Distillery, and had the worlds smallest ever sample of whisky, which I thought was a little odd being to several distilleries/ breweries etc. As it is i’m not the biggest fan of Whisky so I’ll leave that there. Our last spot was the Magnificent Doune Castle as featured in Game of Thrones and Outlander.
As our flight was that evening, we were offered a ride back to the airport which saved us a bit of time and meant that we didn’t have to trek back into the city. It was a bit of a walk from the drop of point and thankfully at this point it was not raining.

I’ve read this back and I realise it sounds a bit negative. Scotland is a beautiful country and I think that perhaps the weather was the main catalyst to my complaints ‘, but, I mean I should be used to that hey.
Looking back at the itinerary I have noticed that there are a few things listed that we didn’t do / see and I think perhaps the organisation of the tour was a little hap hazard in that it wasn’t quite aligned with the program.. which perhaps needs updating on the website.
Our tour guide was helpful, passionate and very knowledgeable about all things Scotland.
Would I recommend this tour: Yes, but go in the summer. ( its not clear, but perhaps some of the activities are not running in the winter months)

This post is entirely my own opinion and is in no way in conjunction with Haggis Adventures. 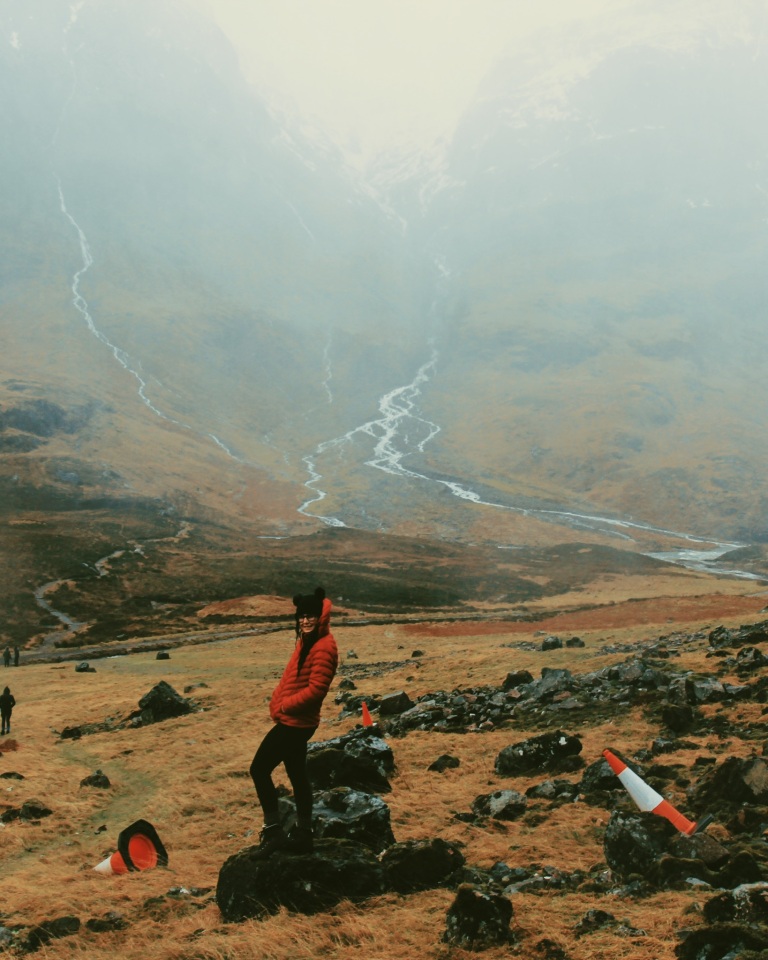 You can watch my Scottish Video here