‘The Mountains are calling and I must go’ John Muir END_OF_DOCUMENT_TOKEN_TO_BE_REPLACED

From Tacos to Sushi,
Poutine to Pies END_OF_DOCUMENT_TOKEN_TO_BE_REPLACED

How my life changed forever. END_OF_DOCUMENT_TOKEN_TO_BE_REPLACED

Our last stop in the Sunshine State!
We left Daytona bright and early and it was straight on to the Kennedy Space Center. The weather was average. I was for some reason, despite an early night ..overly tired. Now I am not the biggest fan of space, technology and NASA kinda shizzle so despite being on Contiki.. I was in no way full of life or excitement. After the standard group photo I needed a drink and apparently a muffin. From what I remember the muffin was pretty decent but I probably should not have eaten it. 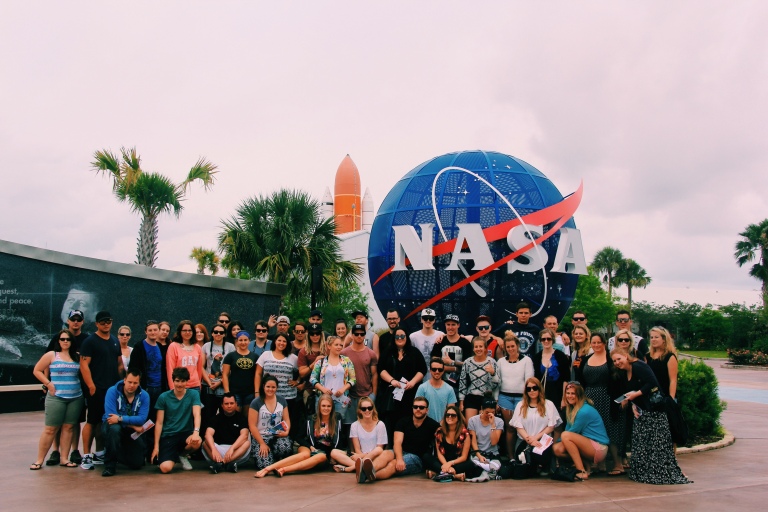 Liz and I kind of spent the morning to ourselves and after ‘breakfast’ we went in search of the bus which was to take us around the center. Literally the oldest bus in the world and nowhere to hide if you wanted to sleep.. It literally seemed to go on for hours with people taking pictures of ugly grey buildings and the NASA Tour Guide talking about some birds on the side of the road. Looking back the whole thing actually seems hilarious and to be honest, I would much rather be back on that bus trying to keep my eyes open than be writing this now. Some of the exhibitions were actually all right so in the end it was a nice and slow morning! Grabbed a salad at one of the vendors and back onto the bus.

So it was on to St. Augustine. Officially the oldest settlement in USA and therefore the oldest town. Its on the coast and to be honest it had a very English feel about it….apart from the weather.
Whilst trying to find some wifi at the hotel I was dragged along into the town to purchase a popsicle. I opted for an ‘Elvis’ Peanut butter, honey etc with something else. Was pretty tasty. Glad I went actually as I got to experience the cute town ( as seen in top photo) On the walk back to the hotel Kirstie, Ella and I stopped off to get a quick spring roll – which despite taking ages was yummy. After a group of us headed to the bar next door to the hotel for a quiz. Probably the worst quiz ever to attend. We came third or last but ended up with free drink tokens anyway.. I had some chili chesse fries as well..because that was pretty much standard by now.
Headed back after a few drinks to an early night.
Florida, you babe.