‘The Mountains are calling and I must go’ John Muir END_OF_DOCUMENT_TOKEN_TO_BE_REPLACED

From Tacos to Sushi,
Poutine to Pies END_OF_DOCUMENT_TOKEN_TO_BE_REPLACED

How my life changed forever. END_OF_DOCUMENT_TOKEN_TO_BE_REPLACED

From the Mayan ruins to the ornate cities to the crystal clear lakes, Guatemala really is a sight for sore eyes. With Mexico to the North, Belize to East and El Salvador and Honduras to the South a country deep in history and culture, Guatemala makes the perfect modern holiday destination.

Where to go and what to do.

Tikal
Arriving in pretty much darkness, the sounds of the jungle and sandy paths reminded me of somewhere I had once stayed in Fraser Island Australia. Our jungle lodge was one of beauty and and serenity which was excellent considering the 3:30am wake up call the next morning. We headed to dinner at the lodge restaurant for a three course meal. Re-fried beans almost more popular here than in Mexico.
Soon enough, after what seemed like zero sleep it was time to get up and take an hour trek through the jungle, walking only by torch light and trying our best to avoid jaguars. It was a rather misty but along with the jungle sounds and howls a sensational morning was made.

Its not too warm at 3:30 in the morning so I would recommend several light layers and a waterproof.. After sunrise we spent the rest of our morning exploring and even climbing some of the ruins. No health and safety here HAHA.

A beautiful Island filled with colourful houses and exotic plants, Florres is definitely a destination for your camera. There’s an aray of little shops, restaurants, market stalls and cafes to keep you occupied throughout your day. Weather is variable. Be prepared for sunshine one moment and storms the next.

One of the worlds most fascinating cities.
Originally the old capital of the Country. If the beautiful cobbled streets don’t make you feel like your in a Disney film then look up and take a glance at the three volcanoes that tower around the city. Known for its delicious coffee and Jade. Antigua is also a haven for international food, wine bars and boutique book shops and cafés as well as having beautiful squares and a pretty delicious nightlife.

We arrived mid to late afternoon and headed straight to the main square to start our walking tour. We were lucky enough to be in the city the week before Easter and celebrations were into full swing. The church shown above is an example of the offerings the local people had made. The streets too, filled iwth colourful sawdust paintings.
We spent our second morning at the best bagel place I have had the pleasure of visiting. After heaven on a plate it was time  for our volcano hike. About an hours drive out of the city is Pacaya Volcano and upon arriving local children offer you sticks to aid the climb as well as horses. I politely declined, determined not to get a horse. 5 minutes later I had a horse. I was rather ill so I and the strength of a feather. The horse was actually pretty fun and took me the majority of the way up. The next bit you have to do on your own. The floor is so slippery so naturally I fell. ( still have the scar to prove it)

Okay so I haven’t seen that many lakes but this one is the best so far. The still waters make both paddle boarding and jet skiing delightful, although perhaps not at the same time.
As a group we headed in our own private boat a nearby lakeside village. We explored the streets, had a delightful lunch and learnt how to make tortillas by a local.
Later that afternoon I could be found lazing in a hammock before going back to the room, putting on some warmer clothes and heading out for a pizza.

I travelled around Guatemala with Contiki. Guatemala has a reputation of being one of the most dangerous places in the world. Whilst on my tour at no one point did I ever feel at risk or in any danger. I would definitely recommend group travel and Contiki offers a host of included and extra activities as spoken about above.

2 thoughts on “Why Guatemala truly is a beautiful country.” 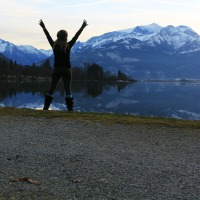